The Gülenists, dubbed by Turkey as FETO, the Fethullahist Terror Organization, are being purged on a massive scale. Those who have been accused include scientists, schoolteachers, policemen and journalists.

By
The World staff

Listen to the story.

Four years ago, a group within the military tried to overthrow the Turkish government. President Recep Tayyip Erdoğan has blamed Fethullah Gülen and his network, the Gülenists, for the July 15, 2016, failed coup d’état, which resulted in the deaths of 251 people and 2,200 injured.

The Gülenists, dubbed by Turkey as FETO, the Fethullahist Terror Organization, are being purged on a massive scale. Those who have been accused include scientists, schoolteachers, policemen and journalists.

Erdoğan has vowed to track FETO members down: “Wherever they escape… we will chase after them,” he said.

Abroad, the Turkish government has managed to extradite, kidnap and otherwise push foreign governments to hand over Gülenists from foreign countries — Kazakhstan, Moldova, Kosovo and Pakistan, to name a few. 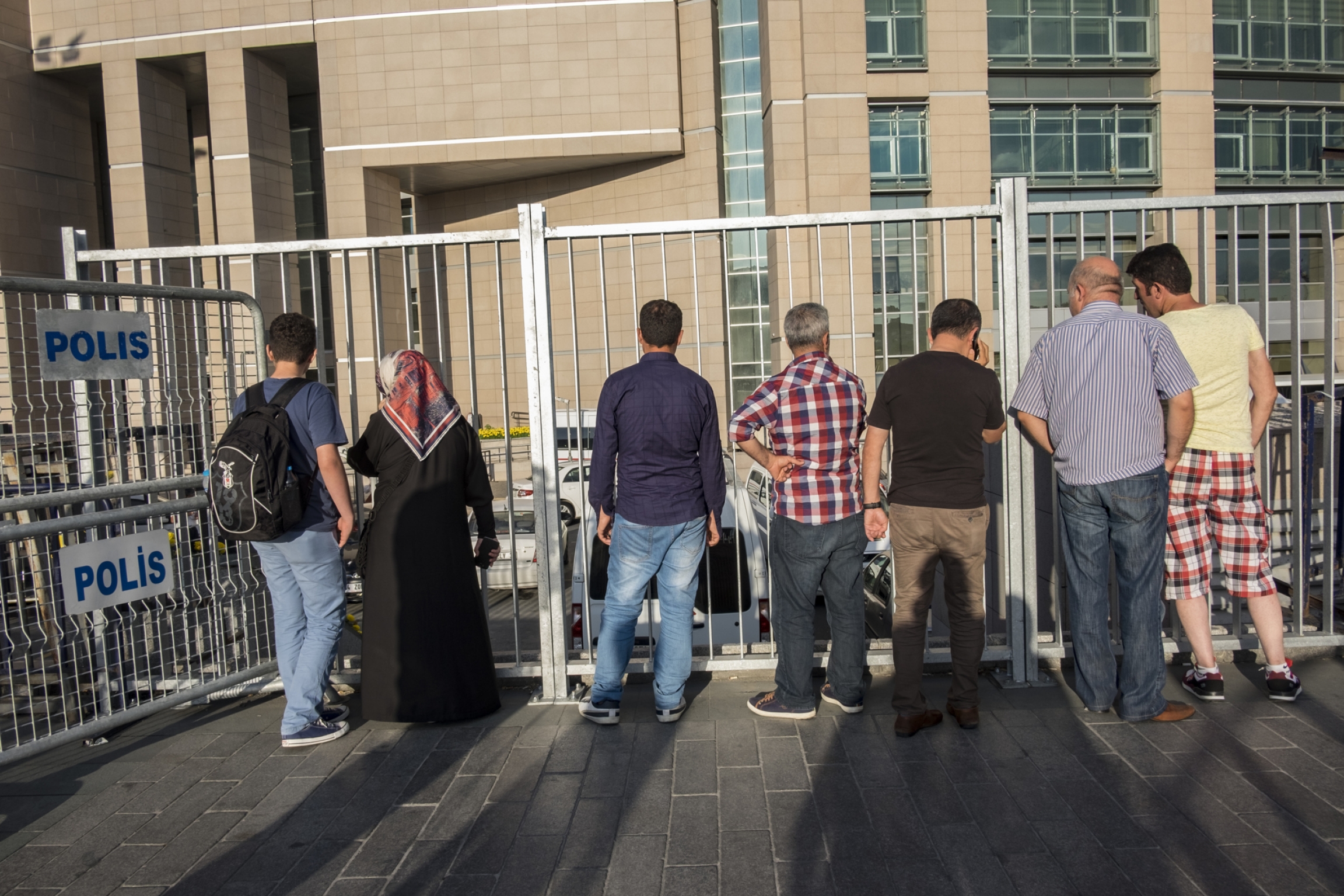 Family members try to get information about their arrested relatives in Istanbul after the failed coup in July 2016.

From the other direction, thousands of Turks have escaped, seeking safety in Europe amid Turkey’s relentless, ongoing post-coup crackdown on dissent.

Even in Germany, where 40,000 Turks have sought safety, exiles feel the long arm of the Turkish state is using its intelligence agencies and bilateral relations to exert pressure on countries who have yet to turn over the accused.

Since 2016, Turkey has shut down Gülenist businesses, expropriating $10 billion worth of assets. It has closed Gülenist media outlets and shuttered Gülenist-owned schools.

Nate Schenkkan is with Freedom House and an expert on Turkey. He says Gülenists have been left jobless, with no chance of restarting their careers.

“For the vast majority of the people in the Gülen movement, it’s quite clear. They had nothing to do with any of this, whether it’s the coup attempt or any other kind of violence.”

“For the vast majority of the people in the Gülen movement, it’s quite clear. They had nothing to do with any of this, whether it’s the coup attempt or any other kind of violence,” he said.

Whisked to the border

Businessman Abdullah Buyuk moved from Turkey to neighboring Bulgaria in 2016, imagining the country would be safe for him as an EU member state.

At the State Agency for Refugees where he went to apply for asylum, he was presented two members of the Bulgarian intelligence service.

One of them offered, “Let us help you with your business here. You can attend the Gülen movement meetings. You let us know who attends those meetings and what they say.”

“I didn’t agree to that, saying I was already cooperating by answering their questions.”

Bulgarian courts denied an extradition request from Turkey for Buyuk.

Around the same time, the Turkish foreign minister announced publicly that they planned to bring “a person of interest” back from Bulgaria.

On his way to a meeting in Sofia, police blocked Buyuk’s vehicle.

Bulgarians drove him 180 miles to the border where they handed him over to Turkish authorities.

Accused of being a member of a terrorist organization, he was kept in pretrial detention for more than three years. He’s now at home with an electronic ankle bracelet while his trial continues.

Bulgaria was doing Turkish president Erdoğan’s bidding. Bulgaria, with a population of just under 7 million, shares a 149-mile-long border with its behemoth neighbor.

Bulgaria’s leaders are aware of the risk of noncooperation. Turkey could easily flood Bulgaria with tens of thousands of refugees hungry to come to Europe.

Since 2016, at least seven more individuals have been handed over to the Turks by Bulgarians.

Pushed back to Turkey

Human rights activists say countless others have been illegally pushed back at the Bulgarian and Greek borders.

Turks have found trouble in other countries as well, including Germany, where they make up the third-largest group of asylum-seekers. One is a 29-year-old journalist who didn’t want to give her name for security reasons. She fled with a group of 11 other Turks across the Evros River to Greece.

Once in Greece, they encountered police. Along with other migrants, they were put into a van.

“We didn’t know what was happening or where they were taking us.”

“We didn’t know what was happening or where they were taking us,” she said.

They traveled for what seemed like a long time. Finally, the vehicle came to a stop.

“They started to pull us toward the river,” she said.

Men wearing balaclavas appeared through the trees. Then the beatings began.

Some of the men were badly bruised, one with a leg injury, another with bruises on his back.

After sunset, someone from the group escorted them by boat across the river and deposited them on Turkish territory. 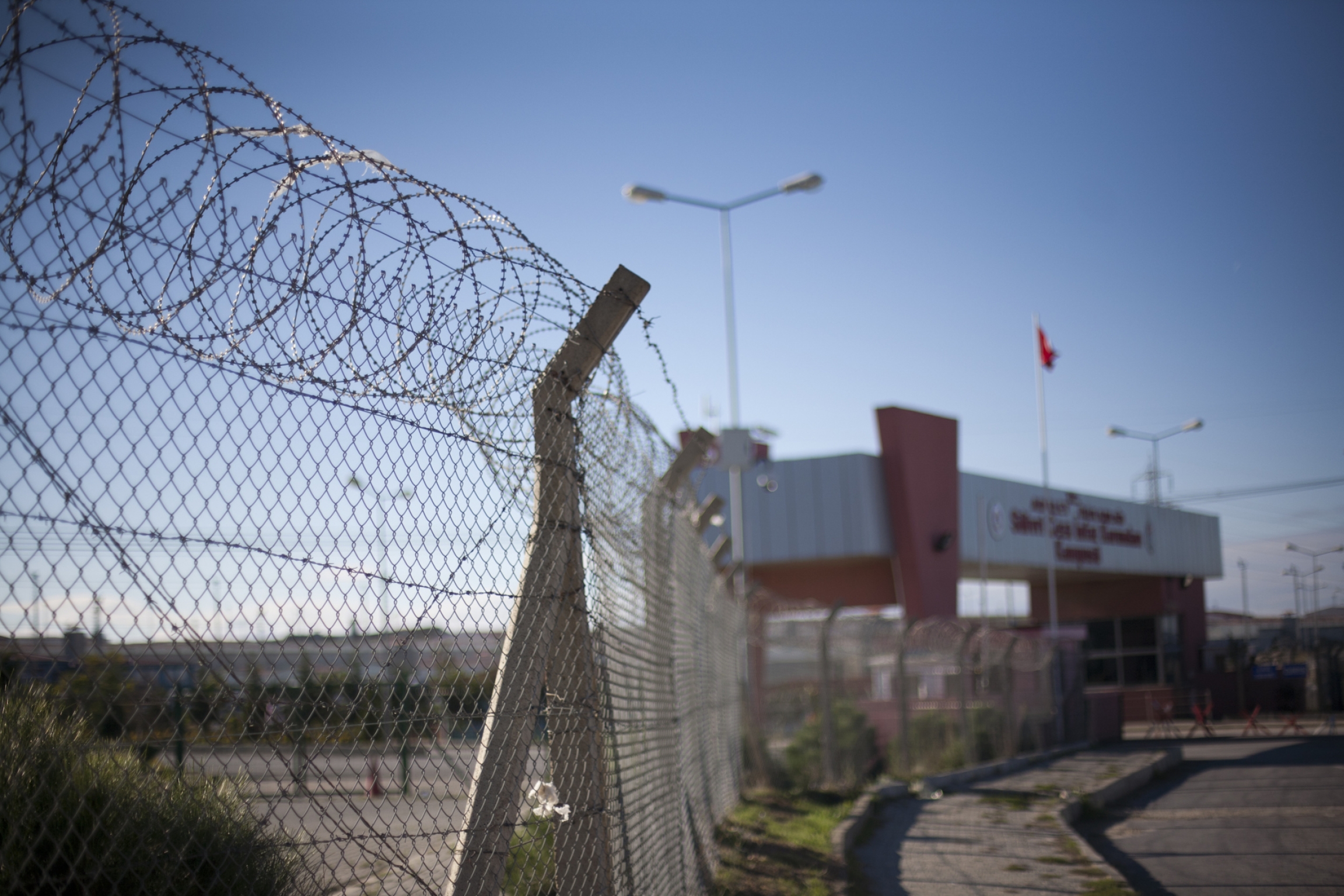 Entrance to Silivri Prison outside of Istanbul, where thousands of political prisoners are held.

They spent a cold, fearful night in the forest, hoping they wouldn’t be discovered by Turkish police. Finally, the following day, they made a successful crossing after reaching out to their social media networks so that journalists and lawyers were aware of their case.

Germany provides asylum to less than 50% of Turkish applicants, according to BAMF, Germany’s Federal Office on Migration and Refugees. The journalist who asked that her name not be used says her family was denied protection in the first instance and is now under appeal.

In 2017, during bilateral meetings, Turks provided Germany with a wish list of 300 people they wanted to be turned over. Among them was Engin Sag, who had worked for a Gülenist TV network. He was living a quiet life in Germany with his wife and two children when, in 2017, police knocked on his door.

The police said: “The Turkish government gave your name to the German government. Your name and photo were in their documents,” according to Sag.

He was warned not to go back to Turkey. He said they promised him protection in the form of a neighborhood patrol.

Sag is also concerned about the possible actions of German Turks, many of whom are Erdoğan supporters.

He said that Turks are encouraged to file complaints using the mobile app of the Turkish police, circumventing German authorities.

“I came across two Turks in the midst of a quarrel. One threatened the other saying, ‘I am going to report you to the Turkish consulate.’ They use this as a threat.”

“I came across two Turks in the midst of a quarrel. One threatened the other saying, ‘I am going to report you to the Turkish consulate.’ They use this as a threat,” he said.

Former Nokta Magazine editor Cevheri Guven, who spent time in prison in Turkey, fled with his wife and children to Greece. After settling there, he received news that “Erdoğan wanted me handed over to the ambassador in Athens. They wanted me and my family and they made some kind of assassination list.” 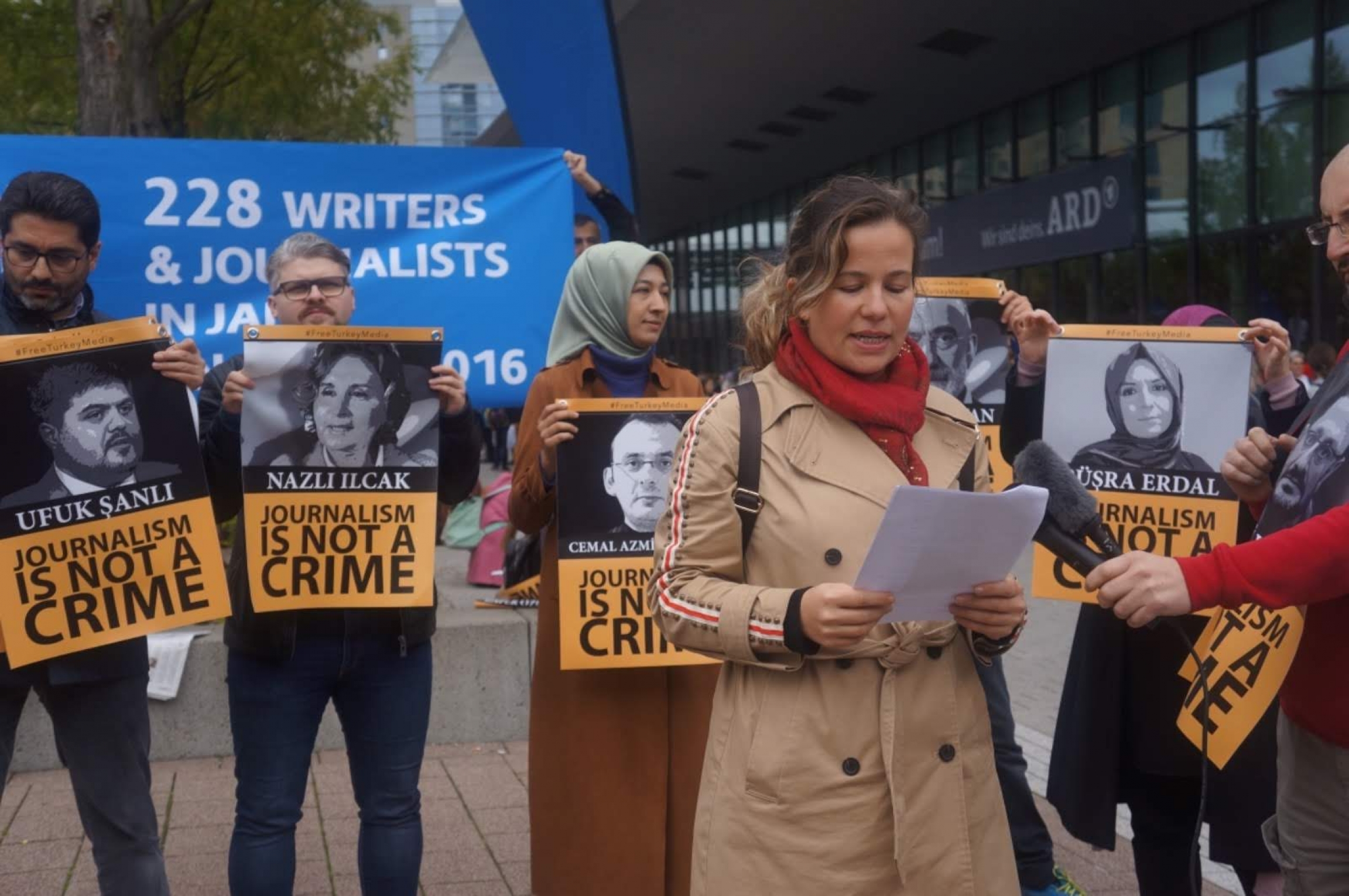 Tuba and Cevheri Guven at a protest in Frankfurt, Germany, 2019.

Courtesy of the Guven family.

They immediately decided to leave Greece.

Guven was later sentenced in absentia to 22.5 years, charged with inciting a civil war. His colleague, Murat Capan, was captured in Greece and pushed back to Turkey. Capan is among the tens of thousands of political prisoners languishing in overcrowded, COVID-19-infested prisons in Turkey.

Due to COVID-19, many criminals were released, while political prisoners remained locked up.

According to Omer Faruk Gergerlioglu, an opposition member of parliament in Turkey, the coronavirus in prison is vastly underreported.

The government has announced 250 cases of COVID-19 across the national prison system, with five deaths. But by Gergerlioglu’s count, there are 250 at Silivri Prison alone, where many political prisoners are held. He estimates the real number of deaths are four times higher as well.

The Turkish government threatens dissidents by going after relatives back in Turkey, he said.

“In Turkey, no one is safe. If they can’t find you, they arrest your son or your wife.”

“In Turkey, no one is safe. If they can’t find you, they arrest your son or your wife.”

He points out that even mothers with infants are imprisoned in Turkey. His own son was detained in Ankara for five days.

“He told me, ‘Father, because of you, I am now in danger. You destroyed my life,” Demir said. “You can imagine how I feel.”

With many friends dismissed from their jobs, in prison or abroad, Demir feels disheartened.

“This is a social genocide. They can’t work, you can’t help them, so they should just die.”

This article was developed with the support of www.journalismfund.edu.