The Chinese criticized the North Atlantic alliance: “The military bloc is a poison, not an antidote”

China and Serbia marked the anniversary of the 1999 NATO bombing of the Chinese embassy in Belgrade. Remembering the NATO aggression against Yugoslavia, Beijing does not hide its concern about the West's attempts to take advantage of the Ukrainian conflict and transfer the bloc confrontation to East Asia. 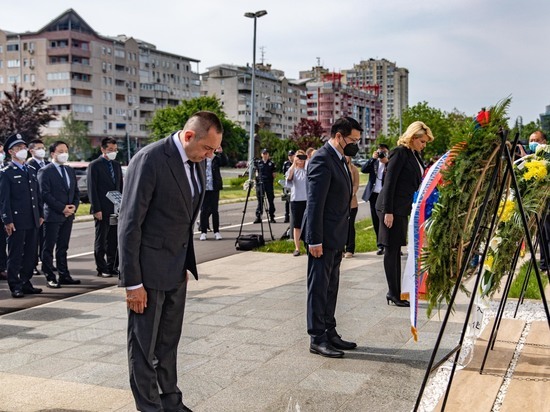 Diplomats from the Chinese embassy in Serbia and representatives of the Serbian government held a ceremony in Belgrade on Saturday to commemorate the 23rd anniversary of the 1999 NATO bombing of the Chinese diplomatic mission in the former Yugoslavia. .

According to the Chinese edition of Global Times, wreaths were laid by Tian Yishu, Chargé d'Affaires of the Chinese Embassy in Serbia and other Chinese diplomats, Serbian Interior Minister Aleksandar Vulin, Minister of Labour, Employment, Veterans Affairs and Social Protection Dariya Kisic Tepavcevic, as well as others Citizens and officials from both sides attended to pay tribute to the three Chinese journalists who died in the bombing.

During the memorial event, Tian Yishu said that the Chinese people will never forget the barbaric atrocities committed by NATO. They will also not forget that NATO bombarded the Balkan country for 78 consecutive days under the pretext of “protecting human rights.”

Serbian Minister Vulin said that NATO's 1999 invasion of Yugoslavia was a crime against a sovereign state and its people and a serious violation of international law.

Belgrade will never stop demanding NATO to take responsibility for its crimes, and Serbia will always be a reliable friend of China, Vulin said.

NATO is still in a bloody debt to the Chinese people, said at a press conference on 24 February Chinese Foreign Ministry Spokesperson Hua Chunying.

Ironically, writes the Global Times, while people in China and Serbia honor the victims of NATO's barbaric atrocities committed by the US 23 years ago, the North Atlantic Alliance is not abandoning its expansionist agenda and moderating its aggression by stoking the flames of the Ukraine crisis and speaks against China with slanderous accusations.

Chinese analysts warn countries, especially in Asia, to be on the lookout when it comes to NATO expansionism and confrontational policies, Global Times notes.

“The Ukrainian crisis and the geopolitical tragedy provoked by it were not enough to quench the thirst of the United States and some Western countries to derive political benefit from the situation,” writes the Chinese edition., Commenting on the agreements reached recently between Japanese Prime Minister Fumio Kishida and his British counterpart Boris Johnson on cooperation between the Japan Self-Defense Forces and the British military. The deal is a “landmark defense partnership” and will strengthen the UK's “commitment to the Indo-Pacific”, according to a statement from Johnson's office. Meanwhile, Kishida made a sensational claim that “Ukraine can become tomorrow's East Asia”, saying that now is the time for the leading G7 countries to strengthen their unity.

“In all these ostentatious remarks,” writes the Global Times, “a dangerous trend is revealed: NATO, which has created a division in Europe and unleashed wars around the world, is trying to apply the techniques of “bloc politics” and “opposition camps” to the Asia-Pacific region. For a long time, the UK has repeatedly advocated the “globalization of NATO” and the “need to pre-empt threats in the Indo-Pacific region” and ensure that the island of Taiwan is “capable of defending itself.” In the Asia-Pacific region, Japan has been unusually active in implementing such a scheme. Tokyo seems to want to be a “guide” for NATO expansion in the Asia-Pacific region.”

According to a Chinese editorial, “Japan wants to take advantage of US connivance in order to break the” shackles “of the pacifist constitution and revive its militarism. The crisis in Ukraine is a “good dish” for some politicians who are constantly amplifying their voice and seeking to create regional tensions.”

“History has shown again and again that the security of a country cannot be based on the insecurity of other countries, – notes Global Times. – The division of the countries of the region into those who are members of the alliance and those who are not members of the alliance can only increase uncertainty when countries have plunged into a paradox and a trap of vigilance and hostility towards each other. The NATO military bloc is a poison, not an antidote to security concerns and tensions in the region.”