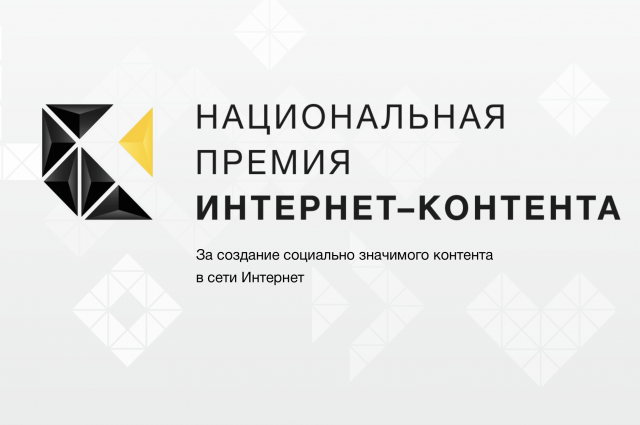 19 projects in the main categories became the winners of the National Internet Content Award. Also, awards were presented in 8 special nominations. The award was established by the Internet Development Institute (IRI) with the support of the Presidential Fund for Cultural Initiatives, the strategic partner was VK.

In the category “Debut of the Year” The victory was won by the Birchpunk channel with the Russian Cyber ​​Village project. The winner in the category “Proud!”  became the studio "KAMI GROUP ENTERTAINMENT" from the show “Startups of the Russian Empire”.

First place in the category “Best video content up to 3 minutes” occupied the Line of Life Foundation from the video «Line of Life — it's you». The best in the field of “Enlightenment and Education” became  Russian Society "Knowledge" with the educational marathon “New Horizons”. In the nomination “Russia of cultural and social values” won Life.ru with the film “100 Years of Yuri Nikulin”.

Stories of volunteers and young scientists

In the nomination “We are together” won by Igor Matvienkowith the project «Live». "Stories of volunteers "Lisa Arlet" from TASS were ahead of everyone in the category “Making the World a Better Place”.

In the nomination “Development and Opportunities”; won the multimedia special project “AiF” "Science: The Age of the Young".

"Best Short Film" recognized “Artist” from the series “About people and about the war” Artel Film Production.

The first in the nomination “Heroes of our time” was the online campaign “History of Doctors. Please breathe!”, initiated by MIA “Russia Today” in support of Russian doctors and volunteers.

«Best Journalistic Project on the Internet» “Antonyms with Anton Krasovsky” were recognized.

In the nomination “Preserving Historical Memory” the victory was won by the VK project “Faces of Victory”.

In addition, within the framework of the award, winners in 8 special nominations were announced. So, the award “Voice of a Generation” were awarded to the authors of the Dobro.University project, which is a course on the basics of volunteering. The VK special nomination was won by the KhakRak program of the Leukemia Fight Foundation. In the category “Internet beyond the age” “for the best travel blog that inspires all generations” the prize went to the travel blogBabushka Zhenya (Evgenia Semyonova).

Blogger Yury Podolyakawas featured in the Just About Important category — ""for the rapid development of the blog and for delivering up-to-date analytics to a wide audience in an accessible language". In the nomination «I’ll be back» the journalist Vladimir Solovyov («Soloviev LIVE") was marked as "the best Internet journalist who was removed from YouTube for political reasons, but rebelled on other sites».

Prize in the First Person Category left the project Wargonzo Semyon Pegovas “the most readable Telegram channel from the scene in the first person”. Special nomination “The World Should Know” went to the authors of the Rutube show “Show Wheel” pranksters Vovan and Lexus, noted “for high-profile revelations in order to protect public values”.

Recall, for the main nominations of the award projects (videos, podcasts, articles, projects in the media and the blogosphere, feature and documentary series, films) were accepted, the digital release of which took place from September 2020 to December 2021. Industry leaders could put forward projects: Russian media, content producers, video hosting companies, media holdings, blogging agencies – in total about 100 organizations. The total prize fund of the first National Internet Content Award is 18 million rubles.

How researchers hope to restore the unique sound of Notre Dame